10 Ways to Honor Memorial Day with your Children

Check out these tips to honor Memorial Day, shared from a WWII Veteran and POW himself! 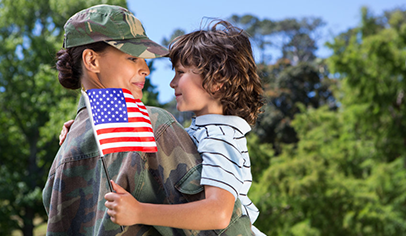 Service men and women are selfless. They risk their lives, leave their families, and give years of service to their nation. Some never make it home, and they willingly take that chance in order to serve. It is obvious, then, the importance of remembering the fallen and honoring the living, so what can you do in return?

We’ve compiled ways to honor Memorial Day with your children, but we took it a step further. We spoke with a World War II veteran and prisoner of war, enlisting his help and ideas.

“Memorial Day is about remembrance—of both those fallen and those still with us,” explained Jerome Roettgers. At 99 years of age, he is full of ideas to honor Memorial Day with your children:

1. Explain the importance of the day.
While this might seem obvious, most children don’t know what Memorial Day is. Explaining what the day is and why it is important is a great starting point to honor the day each and every year.

2. Decorate a grave or place flags on graves.
Not only do the fallen heroes deserve to have their graves embellished, but this brings them into remembrance for the day. Your child will know their name and their title in the service. It opens the conversation to discuss the day and its importance, with a real name as an example.

3. Attend a parade.
Parades are not only common on Memorial Day, but they are everywhere nationwide. Find a parade to attend and join in.

4. Participate in the National Moment of Remembrance at 3 p.m.
While Memorial Day has grown into a day of celebration, marking the start of summer for most, it is a somber day. While we are thankful and happy of what the veterans have given and done, we are paying our respects to those that have fallen and served. No matter what your day brings, stop what you are doing at 3 p.m. for a few minutes, and remember.

5. Write a letter to someone deployed or send a care package.
Writing a letter or sending a care package are great ways to honor fallen troops and recognize the heroes who are still fighting for us every day. While Memorial Day reminds and encourages us to do this, you can do it any or every day! Support Our Troops, Operation We Are Here and Any Soldier are great resources to send thanks to the men and women who keep us safe.

6. Donate, donate, and donate.
There are tons of organizations to help veterans. Explain each organization, and let your child choose which one to donate to. Even more, have your child raise money to donate on their own!

7. Watch the Wreath Laying Ceremony.
Annually on Memorial Day, the President places a wreath at the Tomb of the Unknown Soldier in Arlington. While going to Arlington to see this ceremony would be an added bonus, watching the ceremony online is an option. Using this opportunity, explain what the Tomb is and why a wreath is placed there for Memorial Day.

8. Visit a local veteran’s hospital or send letters, cards, or a thank you.
Veteran, or VA, hospitals are everywhere across the United States. Find a local VA hospital to visit and spend time with a veteran, or make a card or a thank you to send.

10. Share a veteran’s story.
If nothing else, sharing a veteran’s story—whether fallen or alive—is a great way to honor the day. In sharing the story, children will get to know and understand what the day is about, why it is important, and why we honor the fallen and remember the living.

After talking to Jerome, we couldn’t help but share his story:

During my senior year on Sunday, December 7, 1941, the bombing of Pearl Harbor would change my life forever. War was declared against Japan and Germany. I was drafted in March 1943. It was a large draft with most all of my friends going. This started a new life for me, an 18-year-old that had never spent more than a few days away from home, not knowing if I would ever see my family or my home again. I said my goodbyes and began this new, and strange, life.

I first arrived at Fort Thomas, KY, where we were vaccinated—straddling a long bench and sliding forward with both arms exposed, not knowing what we were getting—and dressed before we were sent to our assigned camps. I then boarded a train, not knowing where it was headed, and arrived at Camp Blanding Florida a few days later. I was assigned COA 263rd INF Reg 66th Division. At the end of basic training at Camp Blanding, I became a Buck Sgt., three stripes.

Relocated to Camp Jos. T. Robinson in Little Rock, AK, we received our official division shoulder patch and a more intense and advanced training. After several months, we were sent to New York where we boarded a troopship, the USS Geo. S Squires. These ships were built fast for war, with round bottoms that rolled quite a bit. We joined a convoy with at least 50 ships. There were tankers, mini aircraft carriers, destroyers and more all around us.

As we traveled south, we endured strict blackouts during the night as to avoid being spotted. We arrived in Plymouth, England on December 1, 1944, where we trained to keep up shape as we waited for our placement. On Christmas Eve, around 2 p.m., we received those orders and were shipping out. We were supposed to go to the Battle of the Bulge, but this was changed while in route as our brother ship, the Leopoldville, was torpedoed by German subs. With darkness on our side, we made a dash and arrived in France. When we arrived, we saw all of our dead buddies from the Leopoldville, stacked like logs at the other end of the pier. Because this was a screwup by the British Navy, it was kept secret for more than 25 years, with parents, wives and relatives never knowing what happened.

Our regiment was split up, and I was placed in St. Nazaire on the frontlines. While on a mission to locate the 88s, an artillery piece shot off no more than 100 yards away. We started up the hedgerow to get a fix on it so we could radio its position to our artillery. When all of a sudden, the hillside opened up, and it sounded like everyone in the German army was shooting at us. Outside of the Rifleman, I counted three machine guns. They were kicking up the snow all around us. I spotted the one gunner, had him in my sights ready to fire when the soldier I was with hollered to help him get the radio off his back. I had a knife in my pocket to cut the radio straps, but we both had to stay low. There was a mound about a foot high protecting us. As I was reaching for my knife, three Germans came around the hedgerow and emptied their machine pistol at us. My fellow soldier was hit three times, two in the leg and one in the arm. He was screaming, and I found out later that each bullet had hit his bones. How they missed me, I am still not sure. Then, they threw a grenade at us. The concussion must have temporarily stunned me because the next thing I know there was a machine pistol about six inches from my nose. I kept hollering for an Artz, which in German is doctor.

They brought the rest of us out in the field. A German with a machine gun came out with the ammo belt thrown over his shoulder. I thought this was the end. We all had our hands up. I loosened my watch and let it slide down the inside of my jacket arm. They didn’t shoot, but instead took us as prisoners.

We were interrogated several times on our way to the prison camp, where we were held until the end of the war. Before Hitler was killed, his final order was to kill every POW. Luckily, that was one order that his army did not follow through with. I made it home, met my wife, and had a beautiful family and life.

Above all, I would like to say this from my heart: I have not shared my story to brag or blow my own whistle. It is true, and I feel I was one of the luckiest soldiers to come out of World War II. Many died with a lot less chances than God gave me. Many say they took the best years of our life, but I really do not look at it that way. I met and lived with a great bunch of men. It was a great experience that I am proud to have been a part of. 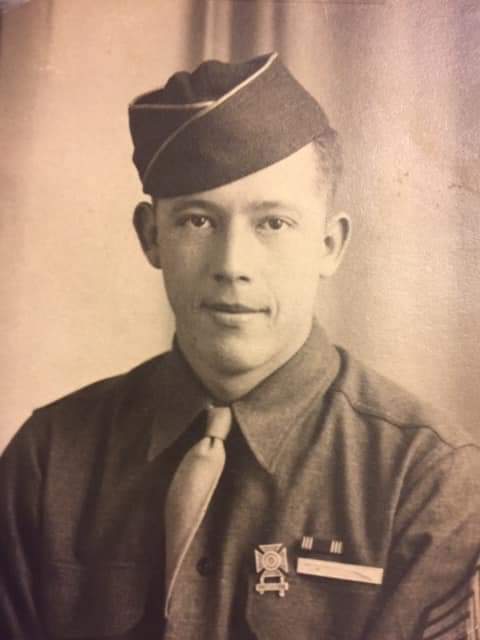 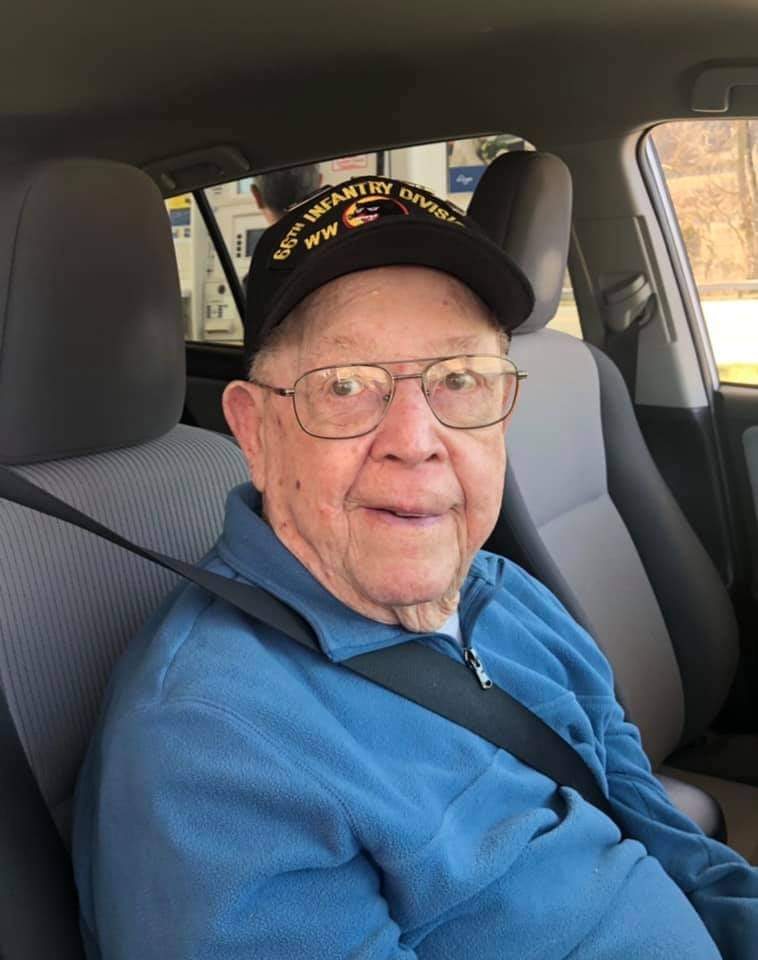