Parent Corner Home » Back to School » Understanding Report Cards: A Guide for Parents

Letter grades are being replaced by number systems or even words on school report cards. We created a guide to help parents decode report card grades, from A to Z. 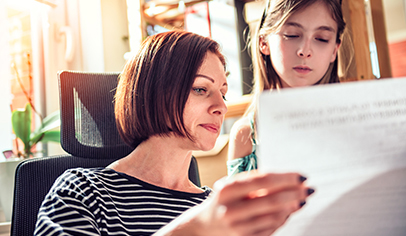 Understanding report cards has become more difficult in recent years. Some schools have left A, B, and C behind in favor of report cards with numbers from 1 to 4 or 5. Others still use A, B, C, and F but have eliminated D. Or how about E, S, and NI? Some avoid letters and numbers in favor of descriptors such as “novice” or “proficient” or detailed narrative descriptions of your child’s progress. And some combine different grading systems depending on what’s being assessed.

It’s enough to make a parent’s head spin. Yet it’s important to know your school’s grading system so you can figure out how your child is doing.

School leaders cite several reasons for moving away from the traditional A, B, and C grading system. Their goal is to give you an accurate picture of your child’s progress, and some teachers find traditional letter grades too limiting. For example, in some schools, teachers rarely give any grade lower than a C. Although a C is supposed to mean “average,” it represents less-than-average achievement when it’s the lowest grade a teacher feels comfortable giving. By switching to a number system, some teachers say they feel free to give kids the grades they’ve earned.

Grading changes are also often intended to signal dramatic changes in assessment. In many schools, teachers no longer grade kids based on how they do compared with their classmates, says Thomas Guskey, author of How’s My Kid Doing? A Parent’s Guide to Grades, Marks, and Report Cards. Instead, teachers are trying to grade students “in terms of what they’ve learned and what they’re able to do,” says Guskey, a distinguished service professor at Georgetown College in Kentucky.

This can be a hard concept for parents to grasp because most moms and dads grew up with a grading bell curve. By switching to a totally different grading system, schools hope to shake parents of the old notions of grading kids based on how they compare with classmates.

This is a traditional grading system, easily understood by parents and students. Or is it? Many parents assume their child is graded on a bell curve, but in most instances that isn’t the case. Instead of issuing a large number of C’s for “average,” as a bell curve would suggest, teachers often give mostly A’s and B’s. Parents should clarify with the teacher what these grades mean even though the letters are familiar.

Poor D, dumped by some schools for failure to offer meaningful information. Some teachers complained that D had become a softer option for kids who really deserved to fail. Others said the C had become such a dreaded grade that it carried the same message D once did.

This grading system is often used with younger children. It’s also popular at schools where teachers want kids to focus on learning, not getting a certain grade. The cutoffs between these letter grades might be more subjective. Often E is for excellent, G is for good, S is for satisfactory, and NI is for needs improvement. Some schools may also have their own alternative letter scale. It’s important to know what the letters mean at your child’s school. Parents should also make sure they understand the standards being measured.

Numbers are often used to help parents get into the mindset of standards-based assessment rather than comparing students with each other. Parents should resist the temptation to equate 1 with A, 2 with B, and so on. Instead, work with the teacher to understand the grading scale and the standards being measured.

Often used with older kids, starting in middle or high school, this simply tells a child’s average based on classroom tests and assignments. Different schools and districts have different cutoffs for A, B, C, or F. At one school, 90 percent might be an A. But at another school, the lowest average for an A might be 93.

Categories such as “proficient,” “basic,” or “below basic”

This is a common method when schools grade children based on standards rather than how they compare with one another. It’s important to know what each category means and the exact standard being measured. These report cards can be long and cumbersome. Deciphering this type of grading system may take longer, but it can accurately tell you how well your child is learning the curriculum.

At some schools, teachers write in their own words how your child is progressing. For example: “Nancy is very good at reading books for her grade level. She rarely stumbles on a word. Whenever she goes up to the next level, though, she struggles, gets frustrated, and quits. I would like to see her push through these more difficult books all the way to the end.” Narrative report cards are loved by some parents for the detail and loathed by others who think they’re too subjective.

With this type of report card, a standard is listed and the teacher indicates whether the child has mastered it. This type of report card might be several pages long and studded with checkmarks, pluses, or minuses. Some parents respond well to these report cards, especially for younger students. Others find them exasperating and just want to say, “So, how’s my kid doing?”

Some report cards, especially for young children, provide descriptions called rubrics that indicate how a child performed on several criteria within a single subject, such as language arts. This enables parents to see whether their child excelled at one aspect but struggled with another. A rubric needs a thorough explainer and may take some time to absorb, but it can convey a lot of information.

When the Report Card Isn’t Good

While these are common grading systems used today, each state, school district, and school might have its own way of telling parents how their child is faring. By taking the time to learn exactly what your child’s report card means, you can make sure you respond appropriately, offering encouragement and helping your child make changes if the report card suggests room for improvement.

If your child’s report card seems out of sync with what you observe at home, talk to the teacher immediately. Report cards are a crucial form of school-home communication, and they’re only effective if everyone knows what the letters and numbers mean.

If your child does bring home a report card that’s worse than you expected, here are some ways of helping your child get back on track.

Make an appointment to review your child’s progress with the teacher. Most report cards are short on detail. Your child’s teacher can tell you more about his specific weaknesses.

Work with the teacher to develop a plan to get your child back on track. Things to consider may be tutoring, a seat at the front of the class, or extra lessons to work on at home with a parent.

Get to the root of the problem. If your child is struggling in math, maybe she missed a key concept several months or even years ago. Today’s testing can identify those weaknesses. Work with your child’s teacher to pinpoint where your child got lost.

If your child’s grades dropped in every subject, consider other factors such as anxiety, social pressure, or distractions.

Assure your child that you still love him and will help him get his grades up where you know they can be.

Originally posted in 2010 and updated regularly. Emily Graham contributed to this article.