Parent Corner Home » Learning at Home » Parents: You Should Know This Internet Slang

Parents: You Should Know This Internet Slang

There's a good chance a lot more kids will be spending a lot more time on Internet-enabled devices over the next few weeks and months. Study our list of common Internet terms and practices to stay in the know. 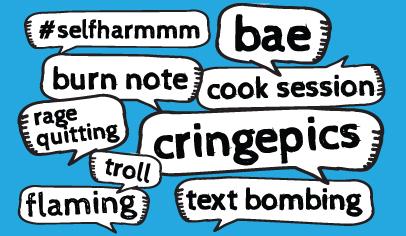 The popular Internet acronyms and terms kids use changes so often, as a parent it can be hard to keep up. And with a lot more screen time in our kids’ futures (at least while we’re all practicing social distancing), it’s especially important to know what’s happening in their online lives. To help, we’ve rounded up some common terms and practices that you might see popping up in your kids’ chats online and IRL (in real life).

(Thanks to our sister site, PTOtoday.com, for compiling and sharing this list!)

Editor’s Note: Because adults (and kids) are spending a lot more time online during the coronavirus pandemic, our friends at Trend Micro are holding a series of free #StayAtHome webinars to support the ongoing education of parents everywhere. Join one of these 30-minute weekly sessions to discuss challenges and get answers from Trend Micro experts and guests on topics like managing your family’s privacy and dealing with cyberbullying. (You can also watch the recorded sessions later.)

A hashtag used to identify (and often glorify) posts about self-harm habits, such as cutting and burning; users also share tricks on how to keep these behaviors hidden.

“Before anyone else”; a term of affection for a significant other or crush.

A message that gets erased after a set period of time.

Using a fake profile or pretending to be someone else (or both) to get a target to share personal information or become romantically involved.

When a group of people gang up on someone else via social media.

Awkward, cringe-inducing photos; these can be used as blackmail and/or be uploaded to public forums.

An insult used to describe new or inexperienced players in the game Fortnite.

Sending angry, rude, or obscene messages to a person, either publicly or privately.

An extreme form of bullying; physical assaults are recorded, then sent to others or posted online.

An idea, activity, or image that goes viral and is shared across the Internet, often in the form of a photo with words superimposed on it.

When a gamer quits after an angry scene directed at other players; it often results from being purposely provoked by the other players.

Using sexual images to blackmail, humiliate, or get revenge on someone.

Sending a large number of text messages to a person at one time so that they can’t use their device.

Someone who deliberately makes an inflammatory post or purposely shares misleading information to get other people to respond emotionally.

Adapted from dictionaries of Internet acronyms and terms compiled by the Cyberbullying Research Center and Common Sense Education.

Get your child's school supply list, right from their teacher.